Starting from the sixth Lanting award, there will be no lifetime achievement award, Education Award, editing and publishing award, Art Award, masterpiece award, etc. This means that, as the highest competition in Chinese calligraphy, “Lanting Award” in the “Lifetime Achievement Award” has become history! Today, let’s take a look at the calligraphers who won the “Lifetime Achievement Award” in the previous five Lanting awards

Qigong (1912-2005), also known as Yuanbo, was born in Beijing. Chinese contemporary famous calligraphers and painters, educators, classical philologists, appraisers, Redskins, poets. He has been an associate professor and professor of Beijing Normal University, a member of the Standing Committee of the Chinese people’s Political Consultative Conference, chairman of the state cultural relics appraisal committee, director of the Central Museum of culture and history, doctoral supervisor, consultant of the Jiusan Society, honorary chairman of the Chinese Calligraphers Association, founding chairman of the World Federation of Chinese Calligraphers and painters, consultant of the Chinese Buddhist Association, the Palace Museum and the National Museum, President of Xiling Seal printing society

Li Duo (April 19, 1930 -), a native of yijiadu, Xinyang Township, Liling City, Hunan Province. Currently, he is an honorary member of the China Federation of literary and art circles, a research librarian of the Chinese people’s Military Museum, a doctoral supervisor of the Chinese Academy of Arts, and a consultant of the Chinese Calligrapher Association. He enjoys special allowance from the State Council. In 2006, he won the second Lanting award of Chinese calligraphy and lifelong achievement award

Shen Peng (1931 -), born in Jiangyin City, Jiangsu Province. Calligrapher, art critic, poet. Honorary member of the 10th China Federation of literary and art circles. Calligraphy is refined and cursive, and has many styles, such as Changli, Kaiji and so on

Sun Qifeng, born in 1920 in Zhaoyuan, Shandong Province, graduated from the national Beiping art college. He was vice president of Tianjin Academy of fine arts, tenured professor of Tianjin Academy of fine arts, member of the Chinese Painting Research Institute of the Ministry of culture, director of the Chinese Artists Association, director of the Chinese Calligraphers Association, director of the Xiling Seal society, and an expert enjoying the special contribution allowance of the State Council, Tianjin is an important founder of Contemporary Art Education (higher art education and social art education). In 2013, he won the second “China Art Award · Lifetime Achievement Award”

Liu Jiang was born in July 1926 in Wanxian County, Sichuan Province. In 1945, he entered Chongqing National Art College to prepare for painting. In 1949, he joined the army. In 1957, he returned to the Department of traditional Chinese painting of Zhejiang Academy of fine arts. He was awarded the title of principal Pan Tianshou to teach calligraphy and seal cutting. He graduated in 1961 and stayed in school to teach calligraphy, seal cutting and other courses. He was a member of the creative evaluation committee of China Book Association, Zhejiang Book Association. He was the director of China Calligrapher Association, Professor of China Academy of fine arts and executive president of Xiling Seal society 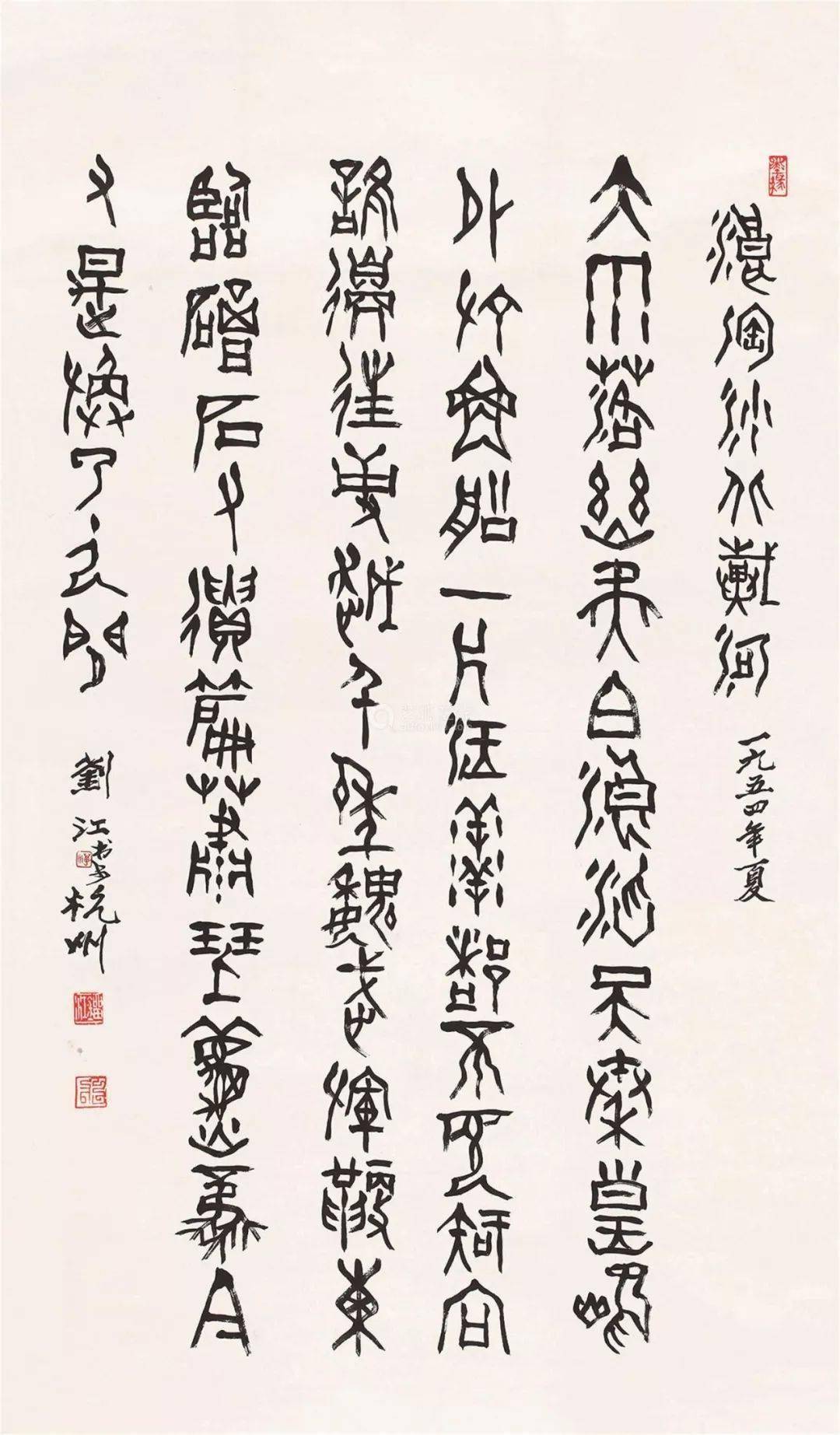